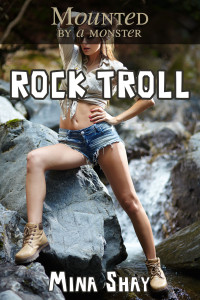 There’s just something about literally being stuck between a rock and a hard place. Here’s the blurb:

There is only one rule that Dana isn’t supposed to break as a new sales rep selling large decorative rock: don’t come to the sales office after dark. It’s a rule she doesn’t want to break after hearing the rumors about the anti-social owner that works only in the evenings. However she desperately needs something from the office.

When she gets there and discovers the shocking truth behind the mysterious Kathor, Dana finds out she’s desperate for something else entirely.